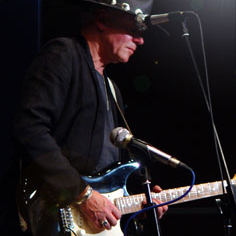 I'm a singer-songwriter-producer,play guitar,keyboards and alto sax.Earlier I was signed to Ariola,CBS in Austria.Had about 14 Singles on the Market,3 LP's 1984 I spent one year in NASHVILLE,TN,where I met a lot of nice people,was invited to record 5 songs with very wellknown musicians and ERNIE WINFREY, a very wellknown sound engineer. At the SOUNDSHOP Rec.Studios,were we recorded our songs,we were invited to watch a recording session with RAY CHARLES and different country acts. JOHN HURLEY(Son of a Preacherman-Love of the Common People) became one of our best friends. Our Song"What about You" was recorded by HOT CHOCOLATE and came out on a single.I wrote about 140 songs,about 80 of them I have on records or as demos. Privat I'm together with Linda Bohnert since 33 years. She is the female voice on all my recordings, my cowriter and had also an LP out etc.Still I'm playing music every day and I'm open for every musical chance.

Enjoyed the " Hey Joe " video ! an excellent nod to Jimi, and also infusing your own style.....Bravo !!

Great Music! Excellent stuff! :-) Thanks for posting it. Hope you're well, and welcome to AOAND.

Hope you have a wonderful upcoming week.

Richard Lukens said…
Harshall... so great to have you here... welcome to Architects... look forward to listening to some of your music...