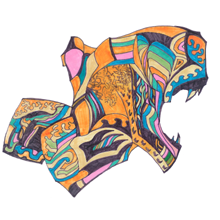 Joe Benham was born in Concord, California in 1970 and began creating abstract art in his unique style in around 1989. At the time, he was studying architecture and had also become involved in the charismatic renewal. The inspiration to draw in this spontaneous way seemed to "just come to him at that time".

Over the course of nearly 20 years and a great deal of conscious evolution, Joe amassed and filed away a modest body of work, which he would later gave away to his friends, one day in the Spring of 2008. One of Joe's friends, making note of what he thought of as some stylistic similarities, introduced Joe to a well known Marin-based abstract artist.

She became something of a inspiration for Joe over the course of the next six to eight months (bringing us to the present time of this writing). In that time, he has produced a body of over 40 new original works been exhibited in two Bay Area shows and is about to be February's featured artist in the monthly periodical "Fairfax Artist in Residence".

It can be said that Joe's style is not purely abstract, although the spontaneity in his pen-and-ink work is basically the same as that of other abstract artists. The simple yet profound difference is in his allowing of the emergence of interpretative forms, which is something that more traditional abstract artists generally try to steer clear of.

Joe is continually inspired to create new art and finds that there is equal inspiration to be found in the interpretation of it (his own as much as anyone else's). Joe believes that it is somehow possible for Spirit to emerge through art and that the style he uses can be used by anybody toward this end, for both its creation and interpretation.

Richard Lukens said…
Hi Joe... welcome to the Architects site... enjoying your art tonight... glad to have you here.....