A Sanders Transition Team internal memo marked as "for discussion purposes only" has been obtained which states that the idea came to Sanders after hearing some music by the band Ancient Future, the first and longest running musical organization dedicated exclusively to the mission of creating world fusion music. The memo states that in cases of international conflict, it will be the duty of the USMAUN to employ Ancient Future to facilitate jam sessions between musicians from the countries involved.

The Senate confirmation process can begin when Congress convenes on Jan. 3, two weeks before Sanders's inauguration on Jan. 20, 2017. Due to the new Green/Democratic coalition majority in the Senate that was swept in on Sanders's coattails, it is widely believed that Ancient Future's upcoming Feb. 11, 2017, anniversary concert at the Trinity Chapel in Berkeley is likely to become a celebration of more than just the band's 38 years of cross-cultural collaboration. Read more.

Berning for the Win 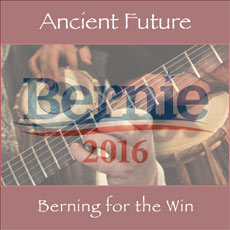 Berning for the Win by Ancient Future (Ancient-Future.Com AF-90352).

Berning for the Win is the first audio/video release in Alt-Left Ancient Future history, and is thought to have played a part in Bernie's narrow victory in the primary after a recount in 34 states, and his landslide victory in the general election.

To be released the day of Bernie's inauguration, Jan. 20, 2017, Indo Latin Jazz Live in Concert captures the magic of the concert debut of Mariah Parker's Indo Latin Jazz Ensemble in front of a full house at Yoshi’s in Oakland, as well as subsequent concerts at Berkeley’s Freight & Salvage, the Throckmorton Theater in Mill Valley, and Bob Weir’s TRI Studios in San Rafael. It is the perfect party music to feel the Bern! Plus, two days after Bernie becomes president, they are performing at the Freight and Salvage as part of their CD release tour.