I am posting an article I found on Mayanmajix.com. I resonated with the idea and thought that this was something that needs to happen. The article inspired me to get this message out to you all to see if we can do something to assist humanity in the most effective way of transformation. This could be the ultimate in a Ghandi way of a peaceful sit in to let the powers that be know that we are done with all this nonsense. Please join in and bring your thoughts and energy to assist. I am getting that 11/3 to 11/5/2009 would be a good time to do this, Maybe three days of doing nothing! 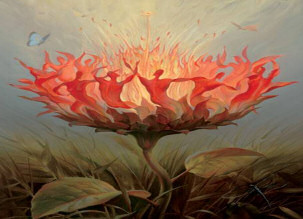 Love to you, Devi


The Final Message: How to Defeat Us
Inside the Mind of The Powers That Be #5


We, The Powers That Be, the negative controllers of this planet, have over time told you exactly what we plan to do to you. Most of you don't believe us, even though we tell you. Hitler told you what he planned in Mein Kempf and then did it. We've told you in things like The Iron Mountain Report, The Plan 2000, The Protocols of the Elders of Zion, The Georgia Guidestones, and other things you can find. Look in the Congressional Record!

Many know of our plan to reduce the population by killing off 2/3 of you by creating starvation, war, and economic disaster; and we keep trying to do it by unnatural biological assaults like the swine flu and other things. We've told you we're going to.

The question is: Can you stop us? We don't think so. We are, after all, what you might call "social dark matter," a kind of invisible glue that permeates this reality that we've created here. You know we're here because it is so impossible for you to do anything good or beneficial on any meaningful scale. Also, we've twisted your minds so you can't think straight, so no, we're pretty sure you'll never stop us.

We are so sure you cannot stop us or the creation of our master/slave One World Government and the destruction of native Earth life that we are going to right now tell you how to do it - not that it will make any difference. We know you'd rather be googling pornography!

Here's how: Do nothing. You are merely a cog in the wheel of our reality machine. You can stop the machine by refusing to be a cog. If you just sit down and do nothing, the machine cannot function. It's simple, really, but we know you won't do it because you have no heart or backbone - which is, of course, why we own this planet.

For what it's worth, that's the basic premise right there. There are 7 billion of you and only a few thousand of us. You are very powerful actually but we do everything we can to keep you from knowing that. Jesus already told you this, you know: "What I have done, you shall do and more"? You don't believe that either!

If you want your planet back, with the freedom of your own health and mind, you actually could take it back if you wanted it enough, but you would have to be willing to take some flack. Check out what happened to the signers of the Declaration of Independence! They didn't exactly have a smooth ride, and we wouldn't make it easy for you, either. We don't like the idea of a slave revolt.

You should watch the movie Gandhi, especially the scene where the workers line up non-violently in front of the factory and the British attack them with horses and clubs. Those of you who are willing to take the blows, put yourselves on the front lines.

Here are the exact steps:

1. Some organizational genius amongst you should create a worldwide movement very quickly. Maybe use the world wide web. Create a website. Call it Taking Back the Planet or Do Nothing Day or something like that.

2. Set a date for everyone on the planet to just sit down and do nothing - I mean nothing. This should be on a week day, not a weekend. Don't go to work or to school, don't buy anything in any store, don't travel, don't buy gas for your car. Particularly don't turn on the television or play video games. Don't use grid-based electricity. Don't do anything you have to pay for, and don't do any work for US - which is, you know, pretty much everything.

3. You should have your List of Demands, sort of like what Martin Luther nailed to the door of the Catholic Church, delivered to us a week before through regular media. To prepare this list, do some "daydreaming," that is, letting your mind wander freely without fear over your ideas and desires, to create a happy planet. Discuss it among yourselves and get the list pared down to the planet-changing essentials. The first thing should be clean, free energy. Maybe demand that we stop poisoning you in your food, that all food be grown organically and that pesticide poisons no longer be made.

We won't tell you everything to put on that list. Maybe you can figure it out and maybe you can't. The important thing is to not include anything that mimics US. Give careful thought as to what demands you make around the money issue. Money is OUR device created to control you. Will anything change if you just swap the money around? What do you want instead? Likewise, it won't change anything if you think that YOU will be the ones doing the killing instead of us, if all you can imagine is acting out your hatred, one-upsmanship and disrespect. We already do that and you can see the results.

You're going to have to imagine a different reality, to propel this planet onto a different timeline where the conditions of now are not carried forward into the future, not even one more day. Even if you don't think you can do this, don't let that stop you. What's the harm in daydreaming a world-wide dream of peace and health - if that's what you want? Daydream what it would look like, how it could happen, and what you would be doing instead of "working for The Man" at jobs you hate, fighting each other, or inventing new hellacious weapons of destruction.

4. So there you are, doing nothing. Your List of Demands has been communicated to us a week before. What do you do on this day of doing nothing? Join together with friends and relatives; have a party; join in group meditations and projections of a better future; or do it by yourself in solitary meditation -- just take a walk, for free, and appreciate the beauty of the world.

And there you have it. Four simple steps. If you don't see immediate change, do it again three days later. You better set up several successive dates in advance, just in case we shut down the internet to prevent you talking to each other. We did this once before, you know, when we confused your language so you couldn't understand each other! You know, The Tower of Babel?

We of course will threaten you, make it difficult for you, kill some of you, but there are 7 billion of you! We throw you away like tissues now, in our armies of war, and don't take care of you after you are maimed in body, mind, and soul in our name. If you are thinking about this right, you will be watching each other's back and taking care of each other - a very different world!

Good luck. Well, whatever. We know you won't be able to do it. In fact, we're betting on it. This planet is OURS.