Simple in debt, Simple out of debt! End Wars!

Simple in debt, Simple out of debt! End Wars!

HOW THESE FIGURES WERE DETERMINED

Current military” includes Dept. of Defense ($653 billion), the military portion from other departments ($150 billion), and an additional $162 billion to supplement the Budget’s misleading and vast underestimate of only $38 billion for the “war on terror.” “Past military” represents veterans’ benefits plus 80% of the interest on the debt.*
Total Outlays (Federal Funds): $2,650 billion
MILITARY: 54% and $1,449 billion
NON-MILITARY: 46% and $1,210 billion
I am a moderate vet. very proud of the military, and the support I get as a vet. However, even as a soldier, it was obvious to me and almost every other soldier I knew, that we were wasting much money and way too many soldier's lifes in Viet Nam. My dear Brother Barry, a medivac helicopter pilot, lost his life over there on Sept. 22, 1969. I am not anti-war, yet, now, like Viet Nam, we are making the same tragic mistake in Iraq and Afghanastan. There is where most of our money is going and that is the simple reason for our terrible debt crisis. Obviously, the way out of debt is to get out of those "wars", and with Prosperity Soldiers (see facebook page), we advocate taking care of our beleagured vets, by giving them similar jobs with same pay in a "peacetime" military. Especially locating homeless vets, and getting them to work or if need be medical treatment, and hopefully both! Peace & jobs! Plus, the great bonus of ending our debt. crisis.
Keenan W Robinson: Hmmmmmm Wow!
Ron Alexander: Absurd, isn't it Keenan - spending so much on war! Peace, ron 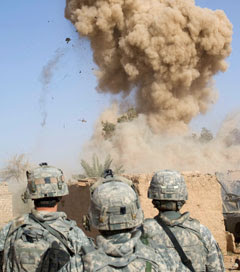 Simple - how we have gotten into such a terrible economic situation. Simple - how to get out of debt.
Today, this older affluent upper middle class gentleman made the comment: who would have thought that our country would be such a terrible economic state? I don't know how we can ever get out of it? I told him about our idea of Prosperity Soldiers - taking the soldiers out of war and putting them to work here on our infrastructure at same pay. I did not press it about ending the wars to do it, as it was obvious he was trying to blame Obama. However, thinking rationally, logically - remember that Clinton had us in black, and the bad debit started when Bush got us into two wars (borrowing much money from China). Most people do not want to hear how much we spend for the wars, but it is astronomical. Also most citizens do not want to hear that our country sends over 50% of our tax dollars to the Pentagon with only about 20% goes to the HEALTH, EDUCATION AND WELFARE of all our people. Think about what a sick situation this is - we spend more daily in the wars than we do on our Emergency situations like Hurricane Irene in TOTAL. How sick is that? By withdrawing from both wars, and reducing all the fat(plenty of it), then we could get back to the sane economics of the Clinton years. Of course, it would obviously be sane if the rich & corporations paid their fair share of taxes. By the way, I am not anti-war, I am not far left. I am pro-peace and rational practicality!
Carol Bell: Dear Ron: I read you great piece to Issac in which you mentioned that the military consumes over 50% of our budget. Hate to tell you, ole boy, it if far more than that. You see, the pie charts that show us the nation's expenses is NOT adjusted for revenue. In 2010, Social Security spent 20% but took in 24% so Social Security should not even be a piece of the pie. So let's remove Social Security and Medicare (both revenue producing programs). What happens? The remaining pieces of the pie each get bigger. I estimate that the military IN REALITY spends close to 80% of our budget. 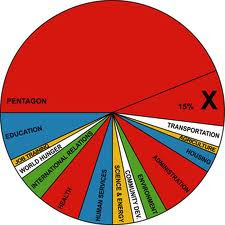 Another look at the Fed. Budget pie - notice the relatively small pieces of the pie that go to education, health & welfare - it's a shame! And why do people vote against their economic self-interest? Fear? Question for Eugene Robinson the brilliant Pulitzer Prize winning columnist, who will be speaking at Coastal Carolina Friday Night!
Carol Bell:
Ron: what is the source of the pie chart. I need to see it more clearly. Thanks.
Ron Alexander: Hi Carol, thanks again for your comment - I think it is even more accurate...google budget pie, and you will find it. I got a frisbie several years ago with similar pie on it. It was being passed out by an activist sponsored by Ben & Jerry (ice cream) at a Democratic campaign event. I first became dismayed at the great budget divide during the Viet Nam war when I saw so much more money going to that misguided war than to health, education and welfare of all people in our country. I thought it was insane then and it is even doubly more now that our country is going broke while two wars are going on. And then you have the fat cats, like Cheney & Halliburton getting rich off these wars! ABSURD! 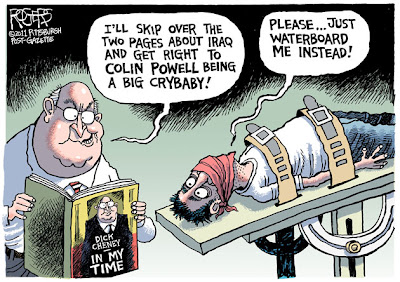 Carol Bell: You have touched on why the rich like war. They get richer and the children of the poor get killed. 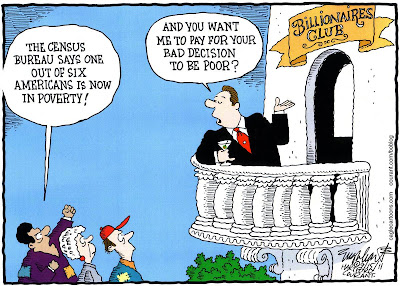 Ron Alexander: Oh, thanks for that gruesome truth - enough to make me vomit! 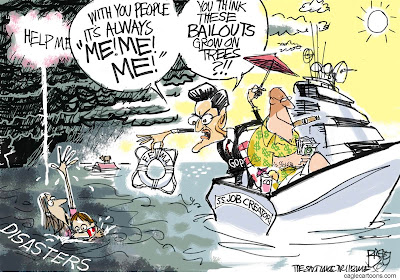 Lydia Porter: Ever watched a card shark? For how long have we been told that Social sercurity is out of cash? When in fact the only reason it is low on funds is the Gov taking money out of Social security for other projects.
Ron Alexander: Rignt on - now we are hearing the same thing about the post office, which uses no tax monies, but is taxed billions by the govt. almost being run out of business unless a new bill is passed that protects the P.O.

Ron Alexander:
Shame! Middle class disappearing, poor are getting poorer due to republican policies going back a few presidents, and they are still trying to do it despite the magnificent efforts of Warren Buffet.
Poverty affects 46 million Americans – USATODAY.com
www.usatoday.com
LEESBURG, Va. – Billy Schlegel plunged from middle class into poverty in the time it took his daughter to play a soccer season...