I love a happy wildlife rescue story! Not all rescues end happily ever after, and even this rescue story that I'm about to post has a tragic note, because the mama bear was killed to poach the baby cubs. The poachers took the twins to an illegal bile farm in Vietman. But the Environmental Police raided the bile farm and rescued the itty bitty cubs. They are now in the custody and care of loving people at Animals Asia. I thought everybody here would like to read this story of rescue. 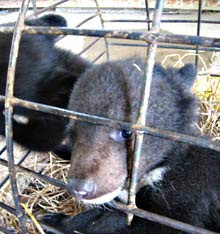 Animals Asia's Vietnam bear sanctuary has two new residents: tiny twin Moon Bear cubs. Following a tip-off, the Environmental Police raided an old bile farm on Sunday, which used to have bears. They confiscated the cubs, and the cubs are now in the care of Animals Asia. The itty bitty babes -- Maggie and Damo -- received immediate veterinary care at Animals Asia and are reported to be in good health.

According to Animals Asia's bear manager, "Maggie is very shy and laps milk from her bowl, clearing up every last drop very quickly. Damo is very energetic and plays rough, and he won’t lap from a bowl, preferring to take his milk from a bottle.”

Successful rescue missions are the focal point of animal welfare work, but they aren't possible without donor support. It costs $9,000 a year for Animals Asia to medically treat a rescued bear and feed, rehabilitate and keep her in good health. The cubs need sponsors, like so many other rescued bears at the sanctuary. Please support UFP's Earth Day Bear Sponsorship drive and donate today. All donation sizes are vital to the continuation of rescuing moon bears from lives of unending torture and pain. Donations are tax deductible in Hong Kong, Australia, UK, Germany and USA. The online donation pages at UFP and Animals Asia are encrypted via the highest SSL server for your security. Learn more about other bear rescues at Ursa Freedom Project. And now for a real treat ... watch video footage of the rescued Moon Bear cubs.