On sweet zephyr breezes or stormy gales, the herring gulls fly, wings flapping in practise flight then gliding along the top of currents for the easiest and effortless flow. They come and they go or do they?.

It is autumn soon. The leaves on the trees have been luscious green all summer. They are now beginning to show tinges of yellow as the temperatures cool a shade. Soon they will be gone and the stark nakedness of their bearers will be evident during the cold wintertime ahead. The trees will be dormant while rejuvenating once again for their new dawn in spring. The seasons, they come and they go or do they?.

The new babe in arms delighting its parents will soon be smiling, walking, talking, growing, living then moving on. Life - it comes and it goes or does it?.

Like the inhale and the exhale, we are, on the in breath, moving through an extraordinarily deep inner consciousness shift, yet simultaneously, we are, on the out breath, bringing forth this sweet inner beauty and tender elegance of SoulSelf which for so long has been hidden deep within our sacred chambers.

The cyclical nature of the eternal and the infinite, ascending and descending as One, simultaneously experienced on the horizontal plane, yet too on the vertical also, with all of life revolving and evolving constantly around the central axis, the Heart of OneSelf as SoulSourceSelf, as the IAM Now Present Presence.

A circle or a square maybe, radiating in all directions from the central point, the Heart of the Matter, CreatorSourceSelf. This central point is everywhere, ever here, nowhere and now here. The vertical "North/South" and the horizontal "East/West" (or is it the vertical "East/West" and horizontal "North/South"?), spinning, revolving endlessly, all being experienced as the OneSelf, IAM Now Present Presence, The Unknown Being The One Known becoming the Unknown, becoming.......ad infinitum.

The ongoing mystery of Life and Love unravelling Its limitless potential of infinite grandeur and magnitude. Freedom of Infinite Expanding Expression

And So It Is and YOUARE as IAM, The One, Original Soul 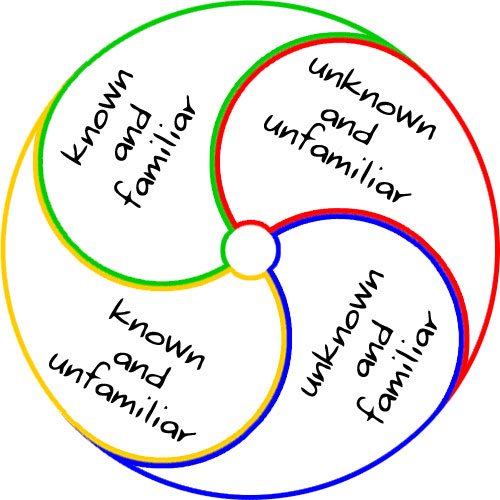 Shared from the Love Heart of The One, IAM YOUARE

Comment by Elizabeth Feisst on August 29, 2009 at 3:02am
Hi Ron,
Yes Gansey is near Port St Mary and Port Erin on the south west of the Island....no we are not big but big in heart....is really is a jewel paradise. I am on holiday everyday here, I am so blessed! Have not been off the Island for almost 3 years!! Last time was in Dec 2006 when I went to Teneriffe in the Canary Islands with a friend....the travelling I presently do is inward and that takes me to wonderful places!! Have done much travelling over the years being a New Zealander by birth and an Australian national. My Manx ancestry has always seen me with a fascination for this place and when I came here in 2003 I felt so at home, I stayed.

I understand your situation with Barry. I do hope that he is able to sort himself out. In the end it is about self responsibility and self accountability. Once can only assist so far. I have found over the years that the more you do for some folks the more they expect you to do and one's help is not appreciated but instead taken for granted and/or chucked back in one's face in the end. Sometimes tough love is the answer and in such cases I have chosen to stand back and leave them to their own devices or even in one or two cases just let go and walked away, leaving them to fall and pick themselves up or stay flat on their face....Then the choice is definitely their's.. I see this approach in such situations as the greatest help one can give....and the greatest gift one can give such souls. Very challenging to standby and watch of course if it is one's close kith and kin but it does work. And I also long ago chose to make my own life as you know after many years of being there 110% for all others except mySelf.
.
Yes may all Beings be happy, peaceful and liberated. So true as long as the work is done by each "incarcerated" soul to free themselves and not expect others to do it for them!

From the One Heart of Love
Elizabethx

Comment by Ron Alexander on August 29, 2009 at 2:37am
Hi Dear Elizabeth, I not only saw the vast panoramic restful blue sea and port, and I googled the whole island. Quite fascinating! I figure Gansey is adjacent to Port St. Mary, which came up on Google but not Gansey.
So the island is not U.K. but is supported by U.K. right? Where do you go on holidays - by boat to Ireland, Scotland or England or fly? Most of my ancestors came from Ayr, Scotland not too far from there. Have you thought of joining the U.K. group? I did and started first discussion group on ancestry. It is rather a small island, do you get island fever? Was there a movie (or tv series) set on that island about the nazis taking over with local underground resistance? I saw a fascinating series (TV) about that situation, and it may have been Isle of Man? What is the closest port on England? I love islands, but was always glad to be on boat, so I could sail away. What made you come back and settle there?
P.S. I hope to get Vipassana Med. into Barry at his prison, where he needs to be right now. He was binging, and became a threat to himself and others. I had care of him until my Mom died, then my Aunt took him in, against my advice. I warned her that giving him his car back was like putting a loaded gun into a suicidal/homicidal maniac's hands. But she did not want to pay for his treatment, and pay my caregiver's fee (not much). He inherited most of Mom's fortune, leaving me with very small percentage, much to most people's shock. However, now I realize I recieved a "divine inheritance" as "the best things in live are not things", and "things are thoughts". Anyhow, I am sitting in this nice beachhouse that Barry inherited, and just after the reading of the will, Barry tried to get the trust lawyer to give me a 30 day notice. I told the lawyer that that was crazy, and that Barry would trash this house and self-destruct. Now the lawyer understands and is resisting my Aunt's attempt to get Barry out of jail, as he understands about him now. Also, it would cost over 300.000 dollars because of extreme damage to police car and injuried to policeman that Barry hit while drunk last month. That was his 4th wreck in the last year with one overdose last fall, when I became heavily involved much to Mom's relief. I had his car in storage and Barry in a treatment day care, which I drove him to 4 days per week. But that was last fall, and Mom died on Dec. 24th, and he has my Aunt wrapped around his little finger, calling her twice a day from jail. They are about 6 hours from here, and I am about to call my Aunt and offer her my closer support, after my dying old dog goes and I finish up my divorce proceedings here against my only wife (she turned out to be sociopathic). I may drive up there (near mountains) for a few days per week or just move there temporarily? much metta, ron
MAY ALL BEINGS BE HAPPY, PEACEFUL AND LIBERATED

Comment by Elizabeth Feisst on August 29, 2009 at 1:15am
Ron, regarding my panoramic pic at the link above? Did you copy paste the link into your browser? Should take you straight to the pic.....(just incase you thought I posted the pic here....too big for that!!)
Love Elizabeth

Comment by Elizabeth Feisst on August 28, 2009 at 5:29am
Yes the sea...subjects us to the depths of life...sorry my image was not viewable...never mine...love your pics of Barry and Honey.Trust big Barry now with time available is reviewing life's opportunities....and all is in divine and perfect order of course. Oops, I could have better said the depth of the ocean of my being. Your image did not come up my dear! I live in a little cedar forest only a block and a half from the ocean here in S.C. Here Little Barry (now in jail for a long time) & Honey play on nearbye beach.

Comment by Elizabeth Feisst on August 28, 2009 at 3:11am
Thank You Ron. I live right on the sea and over the past 13 months is has provided much inspiration for my writing and many ongoing insights for my spiritual growth....here is the view out my window: You will appreciate then just how blessed I am to be here in this special place

It is a panarama and when you scroll to the right my place of abode is just to the right and out of the pic. I look at this view everyday out my window in all weathers and moods and I can tell you the sea has many moods.

Love from One Heart
Elizabeth

Comment by Ron Alexander on August 28, 2009 at 2:28am
Dear Elizabeth, your writing is felt internally here - the waves coming and going in the ocean of my being. thanks, ron