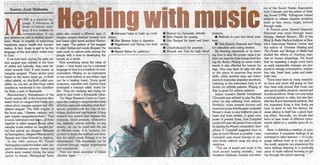 Music is a universal language. It influences all levels of human existence. It is a medium for communication. It can give pleasant as well as healing experience. Music is capable of improving happiness, peace, health and concentration. In fact, music is said, is the language of the soul which unites man to God.
If we look back to the history of Indian music, mostly found in Veda; Saamveda the prime book that consist sangeet in the form of sloka. At the time of vedic period sangeet was chanted in the form of slokas and basically which were devoted towards God. The sangeet was known as “Margiya Sangeet”in the form of sloka in that period. The seven “Swars” that are described as “Udatta”(Ga, Ni), “Anudatta”(Re, Dha) and “Swarita”(Sa, Ma, Pa). The mantras are slokas that were chanted known as “Gandharba Veda” which is a sub Veda of Saamveda.
During 4th century B.C we see Bharat’s “Natyashastra” is a foremost and illustrated book on sangeet, briefly perceives about “Margiya Sangeet” and “Hindustani sangeet”. This book gives a brief description about the Natya, nritya and about the “Anga” and “Upanga” etc. In 24th chapter of the book says-
“Geetan, Vadyam, Nrityam trayam sangeetamurchate”
That is vocal, instrument and dance as a whole, all three together is called Sangeet. Some different valuable books written on sangeet during the period,
such as –
a. “Sangeet Ratnakar” by Sarangadeva
b. “Sangeet Makaranda” by Nanada
c. “Geet Govinda” by Jaydeva etc.

In the 14th century B.C Pandit Sarangadeva had changed the Indian Vedic sangeet in to a disciplinary process, “Swars” and “Shrutis” were created during the same period. In Assam Guru Mahapurush Shree Shankar Deva also had created a different type of margiya sangeet which were devoted towards God and basically based upon some ancient Hindustani ragas. The pattern of the sangeet called “Sattriya” and vocals are named as “Borgeet”. He used music to restore unity among people and for the moral development of the society as a whole.
The modern sangeet can be divided into two parts- “Karnataki” and “Hindustani” pattern. Both the patterns have various similarities and dissimilarities as well.
Here these are all about music. Now come to the point- ‘The value of music’. How music can be a universal language or how it is a medium of communication. Yes, as per my study and opinion playing on an instrument or any vocal melody or any Indian raga can be a healing music. Most of the great musicians, the scientist and some renowned doctors of the world developing the concept about ‘the music for live and life’ of human being. They are studying and trying since hundred years to give music a therapeutic value. Now a days “The Raga research center” in Chennai is making a comprehensive study of Indian ragas and evaluating their therapeutic potential with the help of musicians, doctors and psychiatrist. After a Long research and study it is proved that the human disease like Insomnia, high/low blood pressure, schizophrenia, epilepsy, cancer, authorities, or any anxiety etc. can be cured with the use of different music. It is however important to know the method and duration for which music therapy is to be administered. This knowledge can be obtained through regular experiments and experiences. The correct diagnosis of the disease and then the selection of the precise raga or the music will be help full.

Here are some examples of Indian effective ragas-
1 Ashawari helps to build up confidence.
2 Ahir Bhirav helps indigestion.
3 Bageshwari and Behag for Insomnia.
4 Basant Bahar for Gall-stone
5 Bhairavi for Rheumatic Arthritis.
6 Bhim Palashi for Anxiety.
7 Shiv Ranjani for Heart and Brain stroke.
8 Chandrakaunch for Anorexia.
9 Bhopali and Todi for High blood pressure.
10 Malkosh to cure low blood pressure.
11 Tilak kamod, Kalawati and Durga are some other prominent ragas for relaxations and easing tension.
These ragas can cure people infected from various diseases. By listening repeatedly or by learning how to sing the proper ragas one patient can improve his energy level during his illness.
Playing on some instruments is also effective for human being. Such as- One may learn to play the Sitar or the Piano to improve fine motor skills, while another may use instruments to improvise unspoken emotions. Listening to the instrument ‘Harp’ is effective for arthritis patients. Playing of Flute is good for Asthma patients. The Indian flute maestro Pdt. Hriprasad Chourasia was advised to play the flute when he was suffering from Asthma. Similarly some present doctors and musicians prove that the great composer Mozart’s music is very fruitful in case of heart and brain stroke. A great composer of present time called Don Campbell cured a 60 years old person from a stroke by using the composition of Mozart called “Symphony 9”. Campbell suggested them to play as much Mozart as possible. Later, Don Campbell used sound therapy to prevent stroke without using any drug or medicine.
“The use of sound and music is the most ancient healing modality”, says Jonathon Goldman, founder and Director of the sound healer association from Colorado and the author of “Healing Sound (1996)”. Pythagoras trained students to release negative emotions (such as fear, worry, anger, sorrow) through music. A French actor Gerard Depardic Stammer was cured through music therapy. Herbert Benson, M.D of the “Mind & Body medical Institute” at Boston’s Deaconess Medical Center and the author of “Timeless Healing”, “The power and biology of belief (1996)” had studied the effects of chanting mantras on human physiology. He has found that by repeating a single word (such as AUM) measurable changes are produce in energy consumption, respiration rate, heart beat, pulse and metabolic rate.
In short there are so many researches have done and some are still going on where positive fruitful and effective results are found. That is music can give good positive physical effects, mantel effects and emotional effects. In simple sense we can say music is not only for relaxation for normal person, actually music is for all, especially for the ill and disordered patients. An important thing is that firstly, we have to learn to feel the silence, it is because of the silence is itself a very grate healing effect. Secondly, we should go to learn to hear music of different quality instruments added to a good suitable lyrics (if vocal song).
So in conclusion, music is defiantly a medium of communication. Music expresses feelings of an individual to other listeners. Music is a language without word. In any sphere of the world, anybody can feel the same feelings of a definite piece of music without knowing or without going through the lyrical meaning.


(Sources:--Books: Musicology of India by Prof.V.S.Nigam, The Miracle of Music by Rajendar Menen, Official website-http:/www.indianmelody.com/musicintro.)

Comment by Greg Roach on June 1, 2009 at 7:39pm
Here's a brief article I wrote that touches on some similar themes and ideas:

Two recent news stories - from very different parts of the world - help to confirm what we’ve known for a very long time: namely that sound was an integral part of ancient spiritual practices and that resonance was a key "technology" that was recognized, understood, and used, by the ancients.

Iegor Reznikoff of the University of Paris recently discovered that paintings in the famous prehistoric French caves (at Niaux and Le Portel in Ariege, Arcy-sur-Cure in Burgandy, and others) were located at the spots where the caves naturally exhibited the greatest levels of acoustic resonance. He presented his finds at Acoustics08 in Paris.

The full story can be read Here.

Next, we jump several thousand years, and several thousands miles, to the Aztec empire in central America where recent discoveries have shed light on that cultures use of sound to produce altered states of consciousness, heal disease, frighten enemies and ease the soul's transition in to the afterlife.

The research of Roberto Velazquez, Arnd Adje Both, and other researchers in this fascinating area, are detailed in the article found Here. In particular the article focuses on the sounds created by the so-called "Aztec Death Whistles."

All this aligns beautifully with the things we've seen and experienced in our travels: from Egypt to Thracian temples or Byzantine Cathedrals, sounds was a powerful spiritual tool throughout the ancient world.

Click Here to listen to some toning inside the King's Chamber of the Great Pyramid (from our free podcast Spirit of Place).

And finally here's a pretty cool YouTube video about the "Rosslyn Music Ciphers" - a series of 13 symbols/notations carved into the stonework of the infamous Rosslyn Chapel. Stuart Mitchel decoded these symbols into musical tones. Watch what happens when he performs a "cymatics" test on the resulting sounds: the cymatics patterns match the original stone symbols!

Comment by Jeanne on April 18, 2009 at 3:13pm
Thank-you for sharing this wonderful article about the healing and emancipating power of music. Jeanne

Comment by Laura Danielle on April 14, 2009 at 4:48pm
I really enjoyed reading this. Very interesting! And, right up my alley.