Celebrating the exact 38th anniversary of their first concert, the trailblazing world music group Ancient Future will perform as part of the Trinity Chamber Concerts Series in Berkeley on February 11, 2017.

Ancient Future is the first and longest running musical organization dedicated exclusively to the mission of creating world fusion music. The term was coined by bandleader Matthew Montfort in 1978 to describe Ancient Future’s unusual blend of musical traditions from around the world. BILLBOARD calls the group “trendsetters” for their early contributions to the movement, which seeks to show how people from different cultures can grow by learning from each other. Their first concert was February 11, 1979, at the original Sleeping Lady Cafe in Fairfax, California. 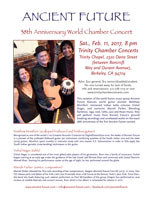