200 Years that Changed the World

It was the last 200 years that changed the world. In 1809 all countries of the world had a life expectancy under 40 years and an income per person less than 3000 dollar per year. Since then the world has changed but it was not until after the second world war that most countries started to improve.


For the first time, Gapminder can now visualize change in life expectancy and income per person over the last two centuries. In this Gapminder video, Hans Rosling shows you how all the countries of the world have developed since 1809 - 200 years ago.

The interactive animations and corresponding documentation are freely available at www.gapminder.org/world.

Comment by Free Digital Universe on April 8, 2009 at 7:58am
An analysis of the last 200 years shows how the distance between the richest and poorest countries grew during the Industrial Age: 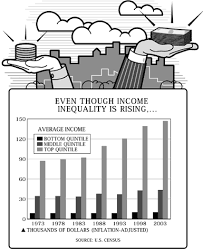 This is now moving in the other direction as technology creates a leveling playing field, a Flat World.