Think Anew..Act Anew ! "See" A New Green Earth !!! It is time that hemp, which can be used for items ranging from paper products to carpets, from textiles to food & oil, from construction material to paints, once again be made "Legal" !!! 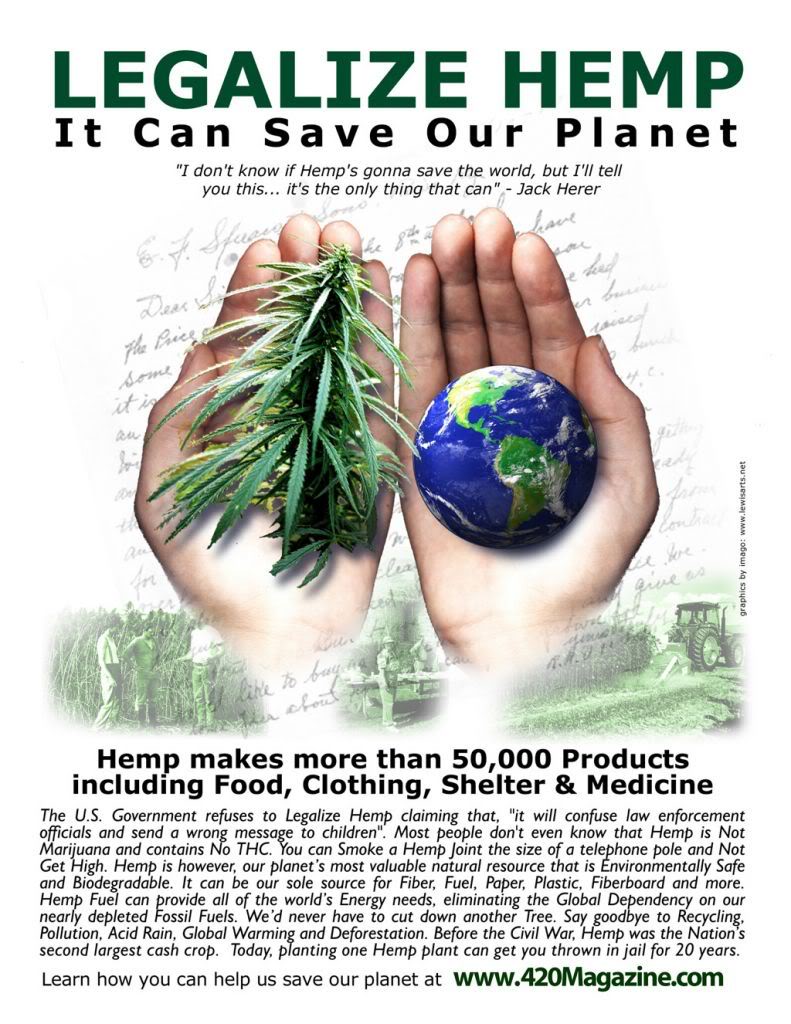 Overlooked in the ongoing debate on marijuana is the fact that
legalization of pot would also legalize industrial hemp production in
California (passed twice by the legislature but vetoed by Gov.
Schwarzenegger).

At the founding of our country, all farmers and anyone with land grew
hemp as it had been a staple for producing textiles for centuries. Hemp
fixes nitrogen in the soil eliminating the need to let fields go fallow,
and it reduces the need for expensive fertilizers.

What changed was the development of synthetic fiber and fertilizer from
oil by a new company called Dupont that launched a lobbying campaign to
criminalize the production of hemp by linking it to its drug-producing
cousin — marijuana.

Some would argue that oil-based products are cheaper to make; but if that were true, there would be no need to criminalize hemp.

They may not realize it now, but industrial hemp production would be a
real boon to California farmers. And legalization could open up a whole
new manufacturing opportunity and provide much needed jobs.

Now that the governor has decriminalized pot, he should be petitioned to legalize hemp. If not, why not? Hemp Will Save The Earth


The earth, our beautiful planet, contains many life forms that have
in many ways been blessings to human beings and contributed to the
evolution of living things. If one considers the earth as one organism,
all of its animals, plants, minerals and micro-organisms, constitute its
ecological network, and they have contributed to our prosperity and
shared the evolution of the network. Our civilization is, however, now
endangered on a global scale by our shortsighted sectionalism,
environmental degradation caused by our social systems that focus on the
oil industry, and the ill effects that these problems have on our
bodies and minds. It has formed competitive societies based on harmful
oil resources and has brought about unavoidable dispossession, warfare
and confilct. In contrast, a symbiotic society based on infinite hemp
and other biomas resources can produce a world of peace and sharing. As a
first step, hemp, a natural material with many uses in key industries,
has recently been highly evaluated worldwide.

It cannot be said that hemp alone will solve all of our environmental
problems. However, the use of hemp and other natural resources can serve
as a warning against excessive use of fossil fuels and hazardous
chemicals, and contributed greatly to our movement toward a sustainable
society. If each one of us becomes conscious of the need for
environmental preservation and starts with what is possible, we can once
again have the type of harmonious, cyclical society that existed in
ancient times.

If hemp is cultivated on 12% of the European landmass, it can meet the
entire world demand for paper, and thus eradicate the need to cut trees
for paper. Hemp pulp, from which hemp paper is made, is as durable as
wood pulp, and it needs only one quarter of the land required for
producing wood pulp. While chlorine is used for bleaching in the
wood-pulp manufacturing process, hemp pulp can be produced using the ASA
pulp method, which hardly produces any pollutants. Moreover, hemp paper
is of such high quality and durability that it hardly deteriorates,
even after 200 years.

Hemp stems can be used to produce biodegradable plastic that does not
produce harmful substances and is highly antibacterial. It can be freely
molded and used for car bodies, building materials and all existing
plastic products. Only a few of its many features are sufficient to
prove that it has great potential as an ecological plastic that can
solve the problems of environmental impact and waste disposal.

To give and example, the American company Ford started using hemp for
automobile manufacturing in 1929. The results of their research were
published in Popular Mechanics Magazine in 1941 along with the
catch-phrase "Organic car born from the Earth". All of the parts except
the frames were made of hemp, and hemp seed oil was used instead of
light oil. The car had one-third the weight and ten times the impact
tenacity of conventional cars of the same type.

Hemp is a human-friendly natural resource - it can adjust the
temperature and humidity of houses because walls made of hemp can
breathe. Hemp houses provide a comfortable atmosphere - cool in summer
and warm in winter. It is an all-weather composite building material
that can save energy for air-conditioning. Hemp board bends and curves
easily, and has the same strength as concrete. It is very light and
resistant to fire. As it is a natural resource, it is biodegradable.
Hemp can totally change our views about housing and make us switch to
environment-friendly houses, because it can be grown for a half a year
and lasts for 100 years. Its use can result in the preservation of
forests and the protection of living things, as well as the restroration
of cyclical ecological system that includes human beings.

One of the main causes of global warming is the carbon dioxide produced
by the burning of fossil fuels such as petroleum and coal. Oil from hemp
seeds and the cellulose of the hemp stem can produce methanol, ethanol
and other kinds of fuel that have the same ignition temperature as
diesel oil. Hemp fuel does not produce heavy metals or sulfur, so it
does not cause acid rain or air pollution. As hemp is a plant, it
reduces carbon dioxide to oxygen as it grows. It has three to four times
the reducing power as a deciduous tree. If hemp is cultivated on only
6% of the North American landmass, it can meet all the fuel demand in
the U.S.

A running test project of bio-diesel cars using hemp oil was established
in the U.S. in July 2001. A car started from Washington on July 4, the
anniversary of Independence Day, and was driven one thousand miles over a
period of three months. In Japan, a car started from Takigawa City in
Northern Hokkaido on April 29, 2002 and was driven 12, 500 km over a
period of four months until September 11. The test used 2, 600 liters of
hemp oil.

Hemp seeds and their oil are excellent foods that are good for human
health. The oil can be used for cooking, massage, lubrication,
cosmetics, and as dietary supplement. Hemp oil contains many elements
that retail humidity, so it can be used for making soap, shampoo and
environment-friendly cosmetics. Hemp seeds contain a protein similar to
that of soy beans, which is easily digested and absorbed into the human
body. They also contain eight kinds of essential amino acids that cannot
be produced by the human body, so they are an ideal food that has
perfectly balanced nutrients.

The nutrients in hemp seeds have many beneficial effects on human
health. They balance and control cholesterol, purify blood and help it
to flow smoothly in the body, thus preventing arteriosclerosis and
increasing immunity. Hemp seeds can keep human bodies young and healthy,
they are effective in preventing aging and promoting longevity.

Human bodies have many receptors that take in the medical components of
hemp. When the components enter our bodies, melatonin, a beneficial
hormone, is secreted, stimulating an auto-therapy mechanism. While
melatonin is secreted, a-waves and c-waves occur in the brain, causing
people to relax as if they were in a state of meditation. Hemp has long
been used as a herb because of its medical effects, and it will gain
importance in the future.

Cotton requires the use of pesticide for its cultivation, and a huge
volume of chemicls in its manufacturing process. Hemp, however, never
requires the use of these harmful substances, a fact that makes it
cheaper to produce. Hemp textile is four times more durable than cotton,
and its productivity per unit of land area is three to five times
higher than that of cotton. In France and Germany, insulation materials
made of hemp and hemp board are already in use. Wooden buildings using
oil resources have given rise to the so called "sick-house sydrome" that
causes cancer and abnormal environmental hormones. These building catch
fire easily and do not decompose. Many buildings are constructed of
wood that is several decades old and last only 30 years.

Hemp can be used to produce 25,000 to 50,000 kinds of industrial
products. It is an annual grass that can be grown in 100 to 200 days. It
is useful for preventing deforestation and global warming b ecause it
has a high capacity for reducing carbon dioxide to oxygen. A very
adaptable plant that can be grown in most environments other than
deserts, snowfields and tundra zones, it does not require the use of
pesticides or chemical fertilizers or deplete the soil of nutrients.

Hemp fabric does not generate static electricity. Since it is highly
resistant to insects and has an antimicrobial effect, herbicides and
insecticides are not required for its cultivation. Accordingly, the soil
can be improved and it is possible to prevent ground water from being
contaminated. It has been reported if one root of hemp is planted, the
surrounding 30 meter area becomes electrically neutral.

From the energy perspective, hemp is a healing plant that harmonizes
with the environment. It has been attracting a great deal of attention
because of its potential to neutralize electromagnetic waves,
radioactive rays, ultraviolet rays, etc. Hemp fabric neutralizes
electromagnect waves generated from electrical products and toxic
substances. The material and its technology shall be required in many
fields, such as architectural materials and health care products.

Hemp fabric has been used in Japan for imperial rituals, traditional
events, Shinto religious services, shrines etc. since ancient times. In
the same way, it has been used for rituals and traditional ceremonies in
other countries all over the world.

In ancient times, the Japanese grew hemp as part of a lifestyle based on
coexistence with nature. Hemp is an annual plant, and thus fits into
the earths basic one-year environmental cycle. Cultivated every year, it
is part of an ecosystem in which everything is connected, like a
circular, harmonious society with no beginning or end. Hemp can help us
to remember what we have forgotten about the wonder of the natural
world. It is generally known that hemp can be used effectively in
various industries and that it is an environment-and human friendly
material. Whether we will use hemp and take advantage of its features
depends on our attitude and our way of life. Japan is a nation that has
strong connections to hemp in every aspect. Through our study of hemp we
have come to understand why it is a plant that Japanese people have
loved from ancient times - it represents a spirit of harmony.

And Now *Join Our* "Hemp Will Save The Earth" Discussion....

The carwash assistant and the garbage bag 7 Replies

I admit I tend to bang on about illusions a lot... but only because they play such a vital role in keeping us in our place.Here's a little short story for you. It has a point so bear with me:One day…Continue

Among It's 'Many' Positive Utilizations : Cannabis (Hemp) 'IS' A "Medicine"..'Not' a drug ! "Viva La Medicina" !Your brotherjbContinue

The illusion of power 2 Replies

What gives one person power over another? In the wider animal kingdom (of which, let us not forget, we are a part), there is a huge diversity of strengths and weaknesses. The lion, for example, is…Continue

You need to be a member of Legalize Hemp ! to add comments!

"Legalize Cannabis~Hemp & SAVE Our Earth & Lives" 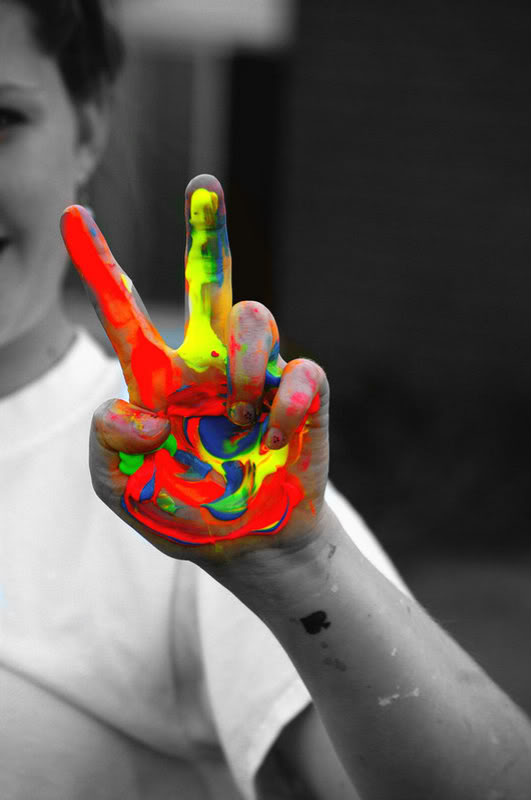 Comment by jb on September 7, 2011 at 9:18am
"Legalize Cannabis~Hemp & SAVE Our Earth & Lives"
https://www.facebook.com/pages/Legalize-CannabisHemp-SAVE-Our-Earth...