The Memorial Service of Dr. Robert Muller will be carried live on www.peaceday.tv on Monday the 27th of September at 11:00 am Pacific Time / 2:00 pm Eastern from Santa Barbara, California.

During our 2010 Peace Day Global Broadcast we were planning to present a Lifetime Achievement Award to Dr. Robert Muller for dedicating his life to the work of the United Nations and world peace.

Dr. Robert Muller passed away on September 20th, the eve of Peace Day.  We presented the award on the broadcast to his wife Barbara and their family then payed a quickly put together tribute to his life, it does not do him justice.  Dr. Muller, you will be misssed, you lived an extra-ordinary life.

Dr. Muller was the Assistant Secretary-General of the United Nations for 40 year's; Recipient of the UNESCO Peace Education Prize; Co-Founder and Chancellor Emeritus of the University for Peace in Costa Rica; and Nuclear Age Peace Foundation World Citizen honoree for 2002.  In 2003 he was awarded the GOI Peace Award.

Dr. Muller was born in Belgium in 1923 and raised in the Alsace-Lorraine region in France. He knew the horrors of World War II, of being a refugee, of Nazi occupation and imprisonment. During the war he was a member of the French Resistance.  After the war he returned home and earned a Doctorate of Law from the University of Strasbourg.

In 1948 he entered and won an essay contest on how to govern the world, the prize of which was an internship at the newly created United Nations.

Dr. Muller devoted the next 40 years of his life behind the scenes at the United Nations focusing his energies on world peace.  He rose through the ranks to the official position of Assistant-Secretary-General and has been called the "Philosopher" and "Prophet of Hope" of the United Nations.

Robert Muller is deeply spiritual and from his vantage point as a top level global states-person has seen a strong connection between spirituality and the political/cultural scene. 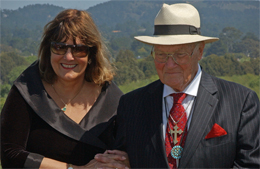 His book, NEW GENESIS, Shaping a Global Spirituality is dedicated to the innumerable good people of this planet who want to live in peace, friendship, freedom and justice, and to all peacemakers.

He devoted his life to those who gave him peace, happiness, and love, including his wife Barbara (in picture to right with him), his children Gisele, Solange, Francois and Philippe and spouses Maria Teresa and Michael, his grandchildren Henry, Curtis, Roberto, Adrian, Lucia, Robert, Christina, Alexander, Victoria, Sophie and Bridget, his stepchildren David and Barbara, all others in his family, and his innumerable friends around the world.