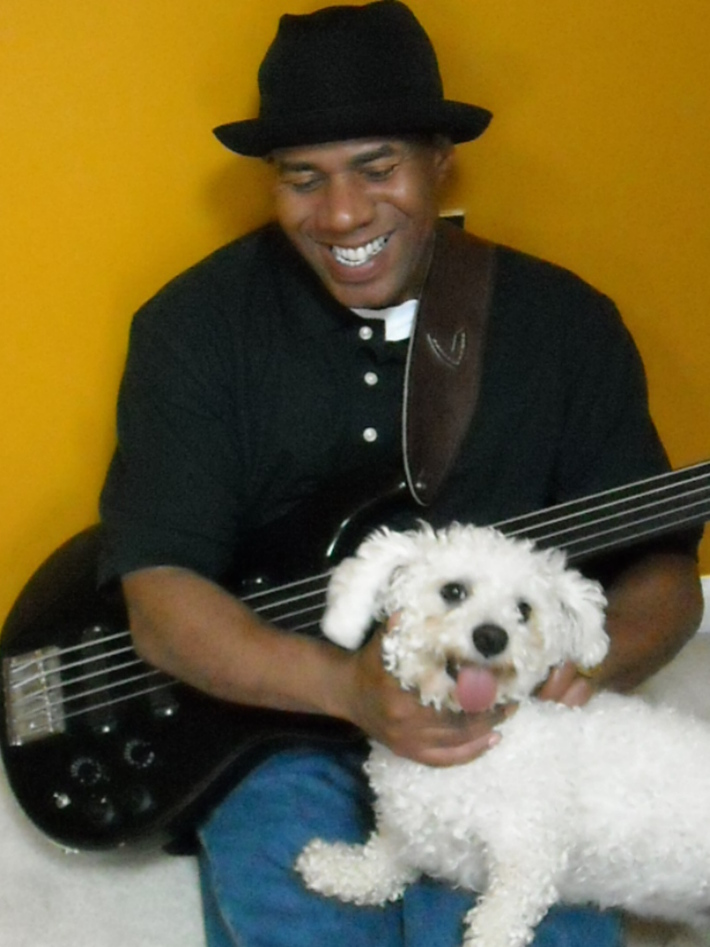 Tony has always been successful at somehow magically slipping out of the boxes in which others would attempt to confine him. During his first professional tour of duty, as the electric bassist for Sun Ra's Arkestra, he was dubbed one of "Them Freedom Boys" by the Dark Master himself. No truer words were ever spoken. And that comment was to be understood to be not such a good thing --- for freedom lacking discpline results in slavery. Freedom informed by discpline becomes magical life, i.e. LOVE. Since that initiation, truly a trial by fire, Tony has spent his life developing the spiritual and mental discpline necessary to broadcast LOVE throughout this shared existence.

A native of Baltimore, Maryland, who began his journey into musicality in the fourth grade, he recalls, "I wanted to play saxophone like Maceo (Parker). I loved his sound with James Brown. However, the only instrument they had in elementary school was the clarinet, so I learned to play that." After gaining modest proficiency on a number of instruments throughout his formative years, he descended to the depths of the bass section, by the end of high school ---- and there he lurks to this day. 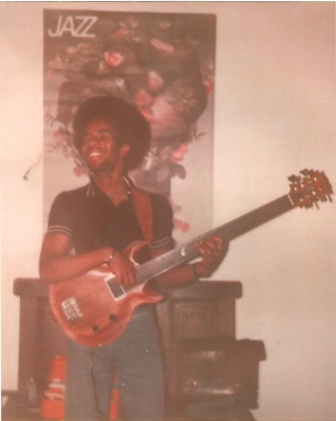 Throughout his rather adventurous career, he's been an undeniably potent component of the live music of countless artists. After an adventurous 3-month romp throughout Europe with Sun Ra’s Intergalactic Research Arkestra (during which he recorded the classic “Sun Ra: Live at Montreux” and “Cosmos”), in the summer of 1976, Tony returned to the USA, for a few months; only to take off for Europe once more, with violinist Michal Urbaniak and his wife, vocalist Urszula Dudziak. Following in the footsteps of famed bassist Anthony Jackson, Tony worked with Urbaniak for a year, completing 2 European tours, 4 albums and encouraging Michal to include pianist Kenny Kirkland (in what would be the young Kirkland’s first foray into electronic jazz) in the band.

Upon his exit from Michal Urbaniak’s band, Tony headed west to California, for a brief stint with the Miracles (post- Smokey Robinson), before returning to Baltimore. Once back in his hometown, Tony played bass in a variety of local area bands, later forming a group with ex-Urbaniak (and Miles Davis) sideman keyboardist Harold Ivory Williams, Jr. The group, known as Dialect, recorded a demo session for Kenny Gamble’s Philadelphia International Records and was to become the label’s answer to the booming market in jazz/fusion music in the late 1970’s. Gamble decided to use the band to back another of his artists, vocalist Jean Carne, while grooming Dialect to spin-off on its own. After Williams suffered a serious illness, which led to his departure from the band, Bunn continued to work with Jean Carne for the following year. Tony Bunn then worked as the bassist for Go-Go Godfather Chuck Brown (and the Soul Searchers) for a year, after which he’d grown weary of the road --- deciding to put music on the back-burner and return to school, to pursue other interests.


It Ain’t Rocket Science; Or Is It?

Armed with a dual degree in Mathematics and Computer Science, in 1984, Tony proceeded to immerse himself in the emerging field of computer programming, while continuing to work as a bassist with local Baltimore area bands. As the demands of his new career began to increase, Tony’s musical outings became less frequent. Over the course of the next 20 years, Tony Bunn would come to redefine himself as being primarily a mathematician and computer whiz; although, he remained but a stone’s throw from the music business --- as evidenced by his receipt of the call to provide bass support for Rock and Roll legend Chuck Berry, for a concert visit to Baltimore in the late 1980’s. During this period, Tony still managed to record several albums with local area bands, perform in concert appearances with the famed Morgan State University Choir and the Baltimore Symphony Orchestra, and he even mounted a few brief international tours; notably, one tour with saxophonist Gary Thomas and another with vocalist Gabrielle Goodman.

It was during the European tour with Gary Thomas that Tony developed a close working relationship with drummer Adrian Green. In 1993, Bunn and Green recorded a quite expansive body of music (on which Bunn rendered some exciting keyboard work, in addition to his bass and compositional offerings) that actually would not see the light of day until many years later. After the project faltered, due to a lack of record label interest (probably owing to the fact that the music would later prove to be very much ahead of its time), the material was shelved; and Tony continued working in the technical arena, moving into the realm of rocket science.

At the dawn of the 21st century, Tony found himself growing increasingly restless, ever searching for new outlets for his creative energies; although, he was no lightweight in the technical arena, his having even received awards from NASA for his development work on the flight dynamics system that supported their Terra Earth Observing Satellite System. Having worked in the aerospace industry for a number of years, he was between jobs when the September 11th incident that led to the destruction of New York’s World Trade Center occurred. Finding it difficult to reenter the aerospace industry, due to the hastily increased security clearance requirements that emerged in response to America’s state-of-emergency, Tony worked on a few less interesting technical projects, while beginning to intensify his involvement in musical pursuits.

However, it wasn’t until he got a call from Paul Reed Smith, to provide bass support for his presentation at the 2008 Dallas International Guitar Festival, that Tony began to get serious about presenting himself as a solo artist. Having originally developed a MySpace page for the sole purpose of being able to have an internet reference to which to direct people he might meet during that festival performance, when Tony was in need of musical material to present on that page, he reached back to some of his choice compositions from the 1993 set he’d recorded with Adrian Green. Surprisingly, the music was quite well-received; some 15 years after it was recorded! Thus, Tony decided to independently release the material as his debut album, entitled “Spirit Moves”.

As interest in the debut album and appreciation of its artistic innovations grew, Tony began to recognize the potential viability of a career as a solo artist. Currently, he’s at work on his second release, entitled “Small World”; a collection of music that spans genres in much the same fashion as did his debut release. Produced by Tony Bunn and Kevin Walker (who, in addition to being one of Bunn’s early bass students, also played bass on Justin Timberlake’s 2-year FutureSex/Love Tour), this recording finds Bunn returning to his roots; and focusing on fully utilizing his fretless 5-string bass to reveal his immensely powerful joy for living. Other contributors to this recording include Bunn’s childhood friend, drumming legend Dennis Chambers (Santana’s drummer for the past 6 years), transplanted Armenian keyboard genius Arshak Sirunyan, trumpeter Mike Fitzhugh, and percussionist Victor Williams.


However, this new release also finds Tony Bunn still expanding his borders, as he steps out front-and-center to sing a song that is destined to become one of the most powerful and controversial songs to emerge from the year 2009. Entitled “Got Me A Black Woman”, the song recounts the tale of Tony’s journey of personal growth, following an episode of domestic violence, in 2007. Far from being an expression of anger and blame, the song describes the process by which one man learned to accept responsibility for his actions; past, present and future. In fact, Tony now volunteers regularly as a mentor to men who find themselves in circumstances similar to the domestic/legal situation with which he was challenged, working through the YWCA’s Abuse Intervention Program.

Although he ranks the work of James Jamerson, Herbie Hancock, Josef Zawinul, Jimi Hendrix, Stanley Clarke and Jaco Pastorius (Tony’s being a younger contemporary of the latter 2 bassists) among his most profound influences, it was his meeting with bassist Anthony Jackson that would prove to have the greatest impact upon the development of his rather unique bass sound. Bunn was so impressed with the sound of Jackson’s custom 6-string contrabass guitar that he developed his own ideas and presented them to a then relatively obscure luthier named Paul Reed Smith. In early 1977, Tony developed the concepts for the 5-string fretted and 8-string fretless bass guitars, in response to a climate (in the jazz/fusion movement of the era) in which the horizons of the bass were undergoing a broad evolutionary expansion. Built by Paul Reed Smith, during the period in which he was hand-making guitars for the likes of Carlos Santana and Al DiMeola, these unique instruments are among the most beautiful examples of Paul's early work to be found in the PRS Guitars company archives. From that period onward, Bunn began playing the 5-string bass, exclusively; thereby contributing volumes to the ever-evolving lexicon of the bass, by developing an immediately recognizable approach to low-register bass work.

Tony Bunn is a talent not to be ignored!

carmelo rodriguez said…
Friendship is made in the heart,

Let me know if you need any help with this issue. Dystonia hits many musicians. Peace, Suzanne

Irene Brautigam said…
Hello Tony
Great to see you here as well! I belong to so many groups but from what I have seen and read so far I think this one will be going to my top three. I read your profile again just to refresh my memory....very impressive and happy to count you as one of my friends.
Irene

Barbara Master said…
I am also new to Architects of the new dawn. It would be fun to know you and your music. Love and creativity are the keys to shifting this beautify world we share to inner peace for all souls.

Henning Stumm said…
Hey Tony,
welcome to Architects of a New Dawn. when you get a minute stop by and check out my music on my page. peace and blessings.
One Love
Henning