Should Marijuana be re-legalized?

I got turned on to pot when I was 14 by a classmate who stole it from his police officer father who in turn had taken "evidence" home. Now that I'm 58 I've been using it for quite a long time.
I think its a great cure for lunacy. All the people that drank beer when I was 18 were for the Vietnam War, all the pot smokers were against it. Since the Vietnam War was based on a lie and it was a completely idiotic war, I would say that alcohol is a very bad drug and makes you stupid. Lets re-legalize pot as it appears to be the only safe antidote to lunacy. Besides that, pot has been legal in this country for more years than it ever was illegal and using a Mexican name for a plant that already had an English name is also very deceptive.
I think it not only is a huge waste of our law enforcement money but also may tend to corrupt our law enforcement officers.

In 1972 I sold 2 ounces of Hashish to an undercover nark. It was in Laguna Beach California and I was a member of the Brotherhood of Eternal Love. Our group was founded some years earlier by Timothy Leary. After $10,000 in legal fees and a hung jury I "love it or leave it" left for Ecuador, South America, since they wanted to give me more time than a bank robber. I was hunted down and extradited back to the USA in November, 1974. I wrote a book about my story, "Birth of an Angel".
I believe marijuana was seeded here by an alien intelligence to help with human evolution. Wacky?
Maybe, but tell me how many species of plants produce a chemical that is similar to a very important one found in the human brain? How many plants species can you tell the males from the females?
BirthofanAngel.com 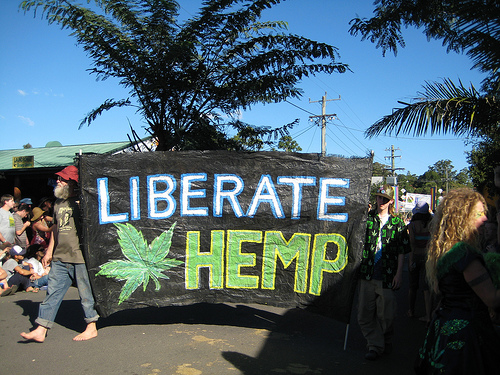 Permalink Reply by Marinspin on February 26, 2009 at 10:47pm
I no longer indulge. I do think it should be legal for those that choose to.

Permalink Reply by Lil on February 27, 2009 at 8:50am
I also no longer indulge but I do think it should be legalized. especially here in Ca where our crumbling economy could get a major boost if it was taxed and sold like beer and cigarettes. Just my take...but billions of dollars...yeah we could use that right about now.

Permalink Reply by Jeanne on February 27, 2009 at 2:41pm
The criminalization of marijuana has been criminal... putting 18yo's in jail where they are subjected to hardcore criminals and raped - screwing them up in ways never imagined in anyone's pipe dreams.

And why? ...because two industries wanted to keep hemp off the market. The pulp and paper industry and Dow Corning's plastic rope folks didn't want or couldn't compete with the renewable resource that hemp is. Instead, they clear cut forests and trashed human lives in the legal system so those greed mongers could get fatter. They produced propaganda like "Reefer Madness", etc., to plant doubt and pit people against one another on the subject, thus turning the light away from their motives and onto the unfortunate ones who got caught up in a corrupt system. Ahh-h-h, the comforts of capitalism...

It matters not whether people smoke a toke or not. The damage done by the criminalization of marijuana has been the real crime.

We know the criminalization of marijuana is not because the big brothers are looking out for our good... but its up to us to reverse that ridiculousness anyway.

I do think that mind altering substances are intended for adults... not for the developing minds and bodies of children. I have recently been caring for someone whose older siblings started him toking when he was 8. So at 17 he was the space cadet of all space cadets. It has been a real challenge to assist him toward a balanced state and help him catch up on things that he was too spaced out to notice... but gotta say in his defense, he's mellow and even loving toward those who aren't.

Permalink Reply by Marc on April 6, 2009 at 1:42pm
We have had an indepth discussion at aoand on the proper place of Marijuana in spiritual awakening.
http://architectsofanewdawn.ning.com/forum/topics/marijuana-and-the...

I am pro legalization

Permalink Reply by Marc on April 6, 2009 at 1:43pm
This video is actually Peter Tosh song not Bob Marley

Permalink Reply by AkashicWreckage on April 6, 2009 at 1:45pm
I was wondering if this topic would come up here (as well as the next one up).
From a purely logical standpoint, it makes the most sense to legalize pot:
Revenue, it's a money maker.
Medicinal purposes, yes we already know some of the benefits and my thinking is that there are more benefits that we don't yet realize.

I think that if we look at the other drugs being pushed out there for every single ailment imaginable---to the people, it's very clear that there has been a drugification of the tens of millions----