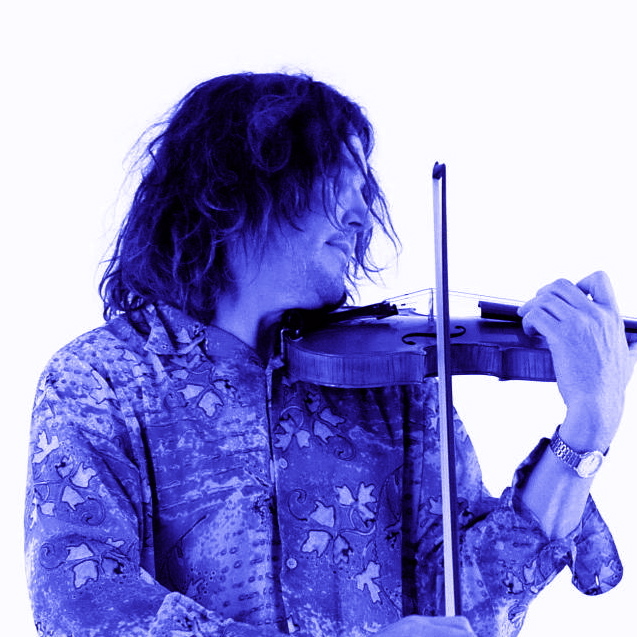 I am an international concert artist, composer and teacher. I specialise in performing concerts entirely through improvisation as a spiritual journey. In addition, I hold workshops and mentor people in self-healing and energy clearing through my work as a Cosmosis mentor and life coach. My teaching work specialises in holistic performance training, healing stage-fright, sacred sound (or 'channeling'), concert violin technique and repertoire, electric violin, and my own breakthrough  improvisation method.

I am especially involved in mentoring people in the arts to help them be their clearest and brightest selves. This helps them clear their unresolved issues, learn how to be very grounded, and to open the door to 24/7 inspiration as a heart based artist, walking their talk and creating transformation and inspiration for their audiences.

Since 2003 I have independently released over 25 albums of my original improvised spiritual music, including 5 CDs of classical improvisations especially commissioned and recorded by ABC Classic FM in Australia, and many other ambient, meditation, world music, and rock albums. You can listen here on the media player on the left side of your screen.

I have had the privilege to give concerts of my music in beautiful venues all over the world, including Tate Britain (London, Museum of London Docklands, The Guildhall Festival (London), Bombora House (NYC, USA), Wesak Festival Mt Shasta (USA), NGV Melbourne (Australia), UWA Winter Arts, Perth (Australia), and Melbourne International Festival (Australia) - even busking!

I work in many international collaborations with other pop, wolrd music, and classical musicians, poets, sculptors and visual artists.

In my teaching work I have coached and mentored principal members of the Zurich Opera, La Scala (Milan), the Vorarlberg State Conservatorium, and the Western Australian Symphony Orchestra. I have given masterclasses at the Guildhall School of Music & Drama in London (where I stayed for nine months), and the Vienna University of Performing Arts (MDW) in Austria.

I am the Director of the annual International Mastercourse for Improvisation in St Paul, Austria, and I teach the Classical Improvisation electives at the Western Australian Academy of Performing Arts (WAAPA) at Edith Cowan University.

In my earlier professional work before I had my musical/spiritual awakening, I played in many orchestras and operas in Europe and Australia, including principal positions in the Vienna Chamber Opera. I was sideman to the stars with Olivia Newton-John, Sir George Martin, John Farnham, and played lead electric violin in Demis Roussos’ band. For 10 years I played guitar professionally in blues and rock bands in Melbourne with the who’s who of Australia’s musician's musicians - that is really where I ventured outside my classical box and discovered improvisation.

I had a very formal training, and I hold a Bachelor of Music Performance (violin) from VCA/Melbourne University where I studied with Donald Scotts and Brian Finlayson. I then studied a further 3 years with the renowned Helfried Fister in Austria. I was also mentored in improvisation by Stephen Housden (Little River Band), and Allan Zavod (Frank Zappa, Duke Ellington). I hold an Australian Government certificate qualification in Mentoring & Coaching, and I am an endorsed Cosmosis mentor at the Cosmosis Mentoring Centre.

I hope you enjoy getting to know me and my music here. Please introduce yourself to me!

About Heart & Soul, Sensitivity, Being a Hypocrite, and Healing Unresolved Stuff

Musicians and creatives in general are such sensitive souls. Always picking up on energy and inspiration. And stress.

Yet somehow music helps put us back together again.

I really love music which has a lot of heart and soul. I guess that is what drew me to classical music as a child. However, after 30 years of playing music of the great past masters like Bach, somehow it isn't enough to tell someone else's story. I wanted to hear the sounds of my own kaleidoscope, my own most…