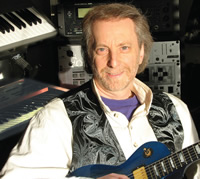 I am grateful to have recieved an email from my friend telling me about this website. The goal and vision of the site to create a new global network featuring uplifting and positive media content is something I am in total resonance with since I am a music/media producer and recording artist in the SF Bay area, who creates CD 's and DVD's with a spiritual/metaphysical focus designed to inspire and elevate consciousness in the world.

I've also been a huge fan of Carlos Santana since the first album, and he has been one of my top two lifelong influences as a guitarist (along with Jimi Hendrix), as well as being deeply inspired by his work as a spiritual warrior and instrument of peace. It is wonderful to see a site like this emerging at such an important time in our planetary evolution, and I'm happy to be a part of it.

For more samples of my music and DVD's, please visit:

I've added two songs here from my latest CD "INDIGO MOON" - the first and last songs on the album. Both songs feature special guest, Jefferson Starship keyboardist Pete Sears, who has also played with Rod Stewart, Tina Turner, and many others (track 1 - electric piano, track 11 - organ) .
Another special guest on the CD is new age music pioneer, Steven Halpern on three songs.
As a side note, people are generally surprised to learn that the "flute" on "Dreams In Motion" was actually played on my guitar-synthesizer. Enjoy!

I've also added 4 minute trailers of DVD's entitled "SACRED VISIONARY ART", and "ILLUMINATION 2" on which I served as associate producer and contributed music for the soundtracks.

- ATLANTIS RISING- Hailed by cdbaby.com as "one of the best new releases of the year, this CD features Michael's special guest, Steven Halpern, on dreamy atmospheric synthesizer and guitar compositions with occasional rhythmic elements that encompass deep sea to deep space.

INDIGO MOON - the follow-up to Atlantis Rising continues his signature soundscapes, but with a bit more emphasis on the guitar and the groove. With a touch of jazz, rock, and world music, this CD features special guest appearances by Steven Halpern, and Jefferson Starship keyboardist, Pete Sears.

FLIGHTS OF FANTASY - In addition to Michael playing guitar and synths, the album features the exquisite flute melodies of Deborah Martin, and the piano & keyboard wizardry of Preston Scott. Along with bass, drums, and percussion, the music ranges from languid and drifting to more groove-fueled flights.

CHROMA ZONE - A collection of ethereal synthesizer soundscapes - "meditative and expansive music painted in colors of sound." "Chroma Zone" has been featured on "Hearts Of Space" as well as "Echoes", a nationally-syndicated radio program, where it has recieved regular airplay.


DRIFTING DEEPER - The musical soundtrack Michael composed and produced for a clinically-based sleep program CD, which provides a subtle sonic tapestry of synthesizers and ocean waves to facilitate sleep or deep relaxation.


For more info or to hear more of my music, please visit my myspace page above and my website:
WWW.MDIAMONDSOUND.COM

ShaunnDogg said…
thank you for the friend request. pretty music, too.

Margie Maderos said…
Thanks for request and comment about my pics.
LUV LLB and Santana. Will listen to your music.
Margie

Adele Getty said…
Enjoying your music this morning, thank you!

Thanks for the friendship! I look forward to listening to more of your music ~ traveling now.

Kat Maguire said…
Hi Michael,
Very nice to meet you...I enjoy your musical gift, thank you for sharing it with all of us!
Check out my myspace page for some of my music...
http://www.myspace.com/katworldmusic
and/or my website: http://www.katworldmusic.com
I am manifesting the perfect Producer...
Peace and abundant blessings,
Kat

Rich Salm said…
Hi Michael,
(ha,ha) We all know that there is no such thing as too many guitars-but we can dream...
You have some really nice tracks here. I really like "Dreams In Motion".
Rich.