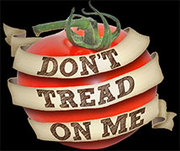 Supporting the efforts to keep seed legal, pure, and unrestricted. Battling the pollution of genetically modified food into our crops. Keeping Organic food production on the rise, and free from restrictive legislation.

You need to be a member of Food Freedom to add comments!

Comment by Ron Tocknell on July 20, 2010 at 5:45am
I wonder if anyone else is aware of Bill S510? If not, please read the excerpt below from Steve Green's article. The link at the bottom will take you to the page where the article is found.

S 510, the Food Safety Modernization Act of 2010, may be the most dangerous bill in the history of the US.

It is to our food what the bailout was to our economy, only we can live without money.

“If accepted [S 510] would preclude the public’s right to grow, own, trade, transport, share, feed and eat each and every food that nature makes. It will become the most offensive authority against the cultivation, trade and consumption of food and agricultural products of one’s choice. It will be unconstitutional and contrary to natural law or, if you like, the will of God.” It is similar to what India faced with imposition of the salt tax during British rule, only S 510 extends control over all food in the US, violating the fundamental human right to food." ~ Dr. Shiv Chopra, Canada Health whistleblower.


Monsanto says it has no interest in the bill and would not benefit from it, but Monsanto’s Michael Taylor who gave us rBGH and unregulated genetically modified (GM) organisms, appears to have designed it and is waiting as an appointed Food Czar to the FDA (a position unapproved by Congress) to administer the agency it would create — without judicial review — if it passes.


S 510 would give Monsanto unlimited power over all US seed, food supplements, food AND FARMING."

Comment by Ron Tocknell on July 20, 2010 at 5:26am
There are a number of groups on AOAND that either promote taking a non violent stand against those who allude to power to the detriment of us all or offer sustainable alternatives to the current unacceptable status quo.

The way I see it, if we're all going in the same direction, it would help if we could all join hands. We need unity on this. I would urge all who feel strongly to join and lend support to any of the groups below of which you are not already a member. This will give us all equal access to shared information and ideas. Let's please unite and share.

Comment by Brotherhood Of Eternal Love on February 27, 2010 at 5:47am
Music is looked upon as something serious and holy, designed to purify the feelings of the people. The enthusiasm of the heart expresses itself involuntarily in a burst of song or the rhythmic movement of the body. From immemorial times the inspiring affects that moves all hearts, and draws them together, has mystified mankind.
The ancient kings made music in order to honor merit, and offered it with splendor to the Supreme Deity inviting their ancestors to be present. In the Temple folks drew near to God with music and pantomimes. The Ancestors were invited to these divine rituals as guests of the ruler of heaven and as representatives of humanity in the higher regions. This uniting of the human past with the Divinity in revering his ancestors with solemn moments of spiritual inspiration established the bond between God and man. Our first Earthdance and Theater.

Comment by Peter P. Budagher on May 12, 2009 at 8:53pm
I raise Honey bees, and I find it funny how people can grow and maintain gardens and crops of altered fruit and vegitables. Most with out ever realizing it. I' glad to be here.

Comment by Peace Portal on May 1, 2009 at 6:48am
Join us for our MMT Charity Radio Show from Peace Portal